As the science of climate change converges with increased frequency and severity of weather events worldwide, Howden’s report calls for a new approach in putting a potential capital pool of USD 1.5 trillion plus to work, extending insurance protection beyond advanced economies into poorer communities who are facing the starkest effects of climate change.

In its new report, ‘Climate in Peril’, Howden, the international insurance broker, analyses a wide range of topics that will dominate agendas in the run up to COP26 – including the science of climate change, increased loss frequency and severity, the power of insurance in incentivising ‘better’ behaviours through an ESG lens – alongside the opportunities presented by the transition to net-zero and the innovative use of insurance capital in the disaster relief space.

Key highlights from the report:

Data and analysis in the report reinforces the link between the changing climate, more extreme weather events and higher insured catastrophe losses. It explains that increased loss frequency and severity elevate the importance of insurance, but that accessibility is a problem for many of the world’s most vulnerable communities.

David Howden, Howden Group CEO, explained: “The power of insurance both in removing barriers to the transition to a lower-carbon future, and in picking up the pieces when disaster strikes is immense. However, we cannot continue with a model that only protects those who can afford it.

“The need to deconstruct and rebuild insurance models in response to climate change is an opportunity to build back a more balanced approach, one which supports the long-term resilience of the world’s most vulnerable populations.”

There is now no doubt that climate change is impacting the frequency and severity of certain weather perils. Analysis in the report demonstrates the impact this is having on insured loss patterns. When comparing the trajectory of weather-related insured losses over the last 50 years with those occurring from man-made events (figure 1), there is a striking underlying increase in weather-related insured losses especially over the last 10 years, even when allowing for inflation and asset growth. 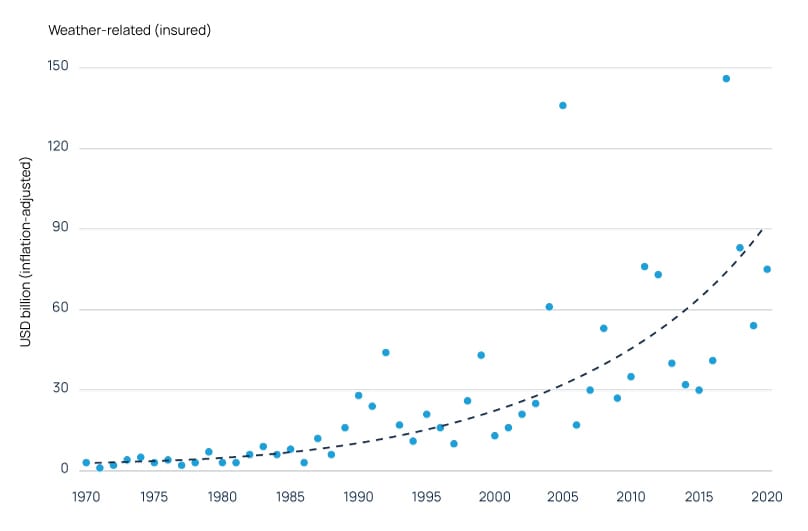 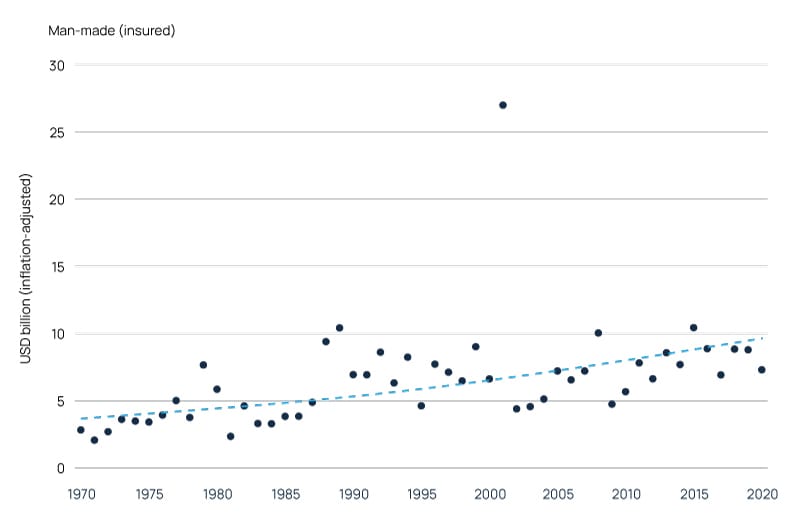 After a period of benign catastrophe loss experience in the middle of the last decade, a succession of intense, mid-sized weather events, within the USD 10 billion to USD 30 billion bracket has hit the insurance market in the last five years (figure 2). Twelve events incurring losses greater than USD 10 billion have been recorded since 2017, more than double anything seen previously.

Wildfire risk in particular is under considerable scrutiny. Global insured wildfire losses increased 500% during 2010-2019 compared to the previous decade (figure 3). In California, the state’s eight biggest wildfires have burned in the last five years. Accompanying (severe) losses are now an annual occurrence: more than USD 40 billion of insured damage has been reported in California since 2017, a quantum more associated with tropical cyclones and earthquakes. 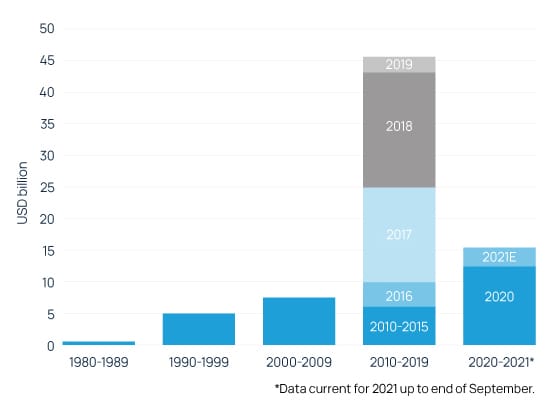 The pace of change over a relatively short timeframe is starting to move the (re)insurance market. The significant shift in loss experience is forcing insurers and reinsurers to reassess their views of risk. Howden’s research indicates that those expecting a return to the loss amounts of yesteryear are likely to be disappointed: the past is no longer a guide to the future for climate-sensitive perils.

The cost of climate in emerging economies

Communities in emerging markets contend with both lower rates of insurance penetration and higher risk of GDP decline than their developed counterparts. This leaves them both more exposed to shifting weather patterns and extreme events, and less able to draw on funding to help with recovery.

The report shows how the impact of lost economic activity endures for longer in developing countries by drawing a comparison between the GDP recovery in New Zealand, following a series of earthquakes in 2010/11 (figure 4), versus that of Mozambique, following severe flooding in 2000 (figure 5). Whilst New Zealand’s economy recovered just 18 months after the first event, Mozambique failed to return to its pre-flood GDP trajectory. This example is testament to the economic value insurance brings to post-disaster recovery. 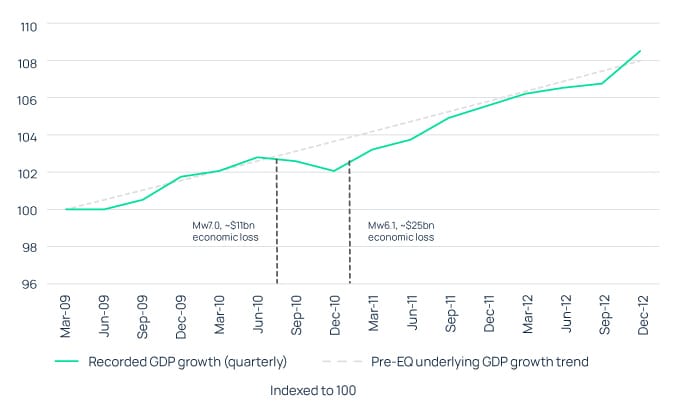 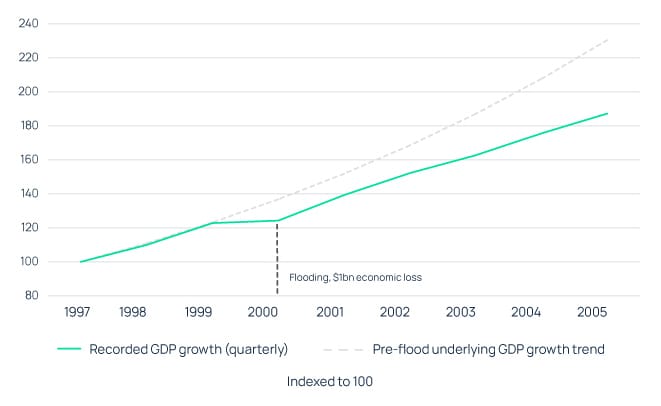 Disaster relief and the role of insurance

Howden believes there is an opportunity for insurance to be used to create new markets and act as a force for social good by building resilience in communities without access to traditional forms of protection.

Whilst governments and NGOs are taking on a greater burden of risk at a time of strained public finances, insurance solutions and private capital are severely underutilised for disaster relief funding. The report finds that the proportion of aid contributions relative to total humanitarian needs fell to a new low last year, resulting in a shortfall of close to USD 20 billion (figure 6). 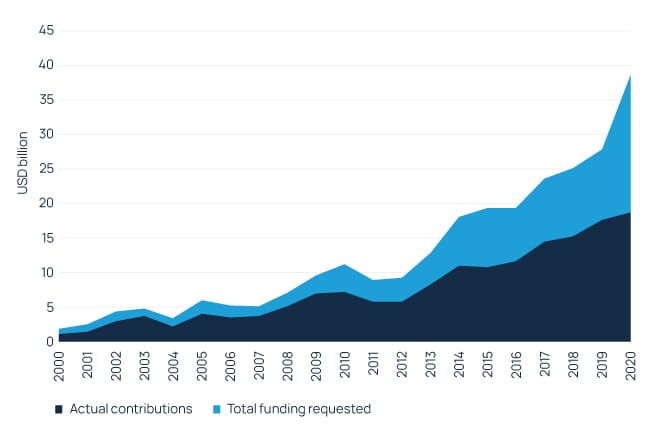 Charlie Langdale, Head of Climate Risk and Resilience at Howden explained: “Traditional methods of disaster relief funding cannot keep pace with demand, and existing risk transfer products cannot close the protection gap. The magnitude of the issue requires something far more imaginative and innovative, something that resets how disaster relief is funded, with insurance at its core.”

He continued: “The volcano catastrophe bond launched earlier this year for the Danish Red Cross has proven that insurance-based products can bring together charitable donations and private capital in a way that provides more funds, more quickly to those who need it. Scaling this model up unlocks significant potential to address the imbalance in accessibility, whilst creating an attractive market for investors.”

Howden concluded: “I am convinced that what we have achieved with the Red Cross will prove to be a game changer. By focusing our collective expertise, data and ingenuity on creating new markets, we can unlock the huge sums of private capital looking for environmentally and socially conscious investments. This isn’t about tweaking existing models, it is about reinventing risk transfer and creating completely new markets. This is about changing insurance for good.”